Citizen science is research done by everyday people, anytime, anywhere, to help answer questions scientists can’t answer alone. In order to turn curiosity into impact, Citizen Science Month is recognized annually in April. Community libraries can serve as a hub for citizen science by mobilizing patrons to collect data and spread the word about their efforts, and participants can develop a deeper understanding of scientific and health literacy through their active involvement in the scientific process.

CitizenScience.gov is an official government website designed to accelerate the use of crowdsourcing and citizen science across the U.S. government. The site provides a portal to three key components: a catalog of federally supported citizen science projects, a toolkit to assist federal practitioners with designing and maintaining their projects, and a 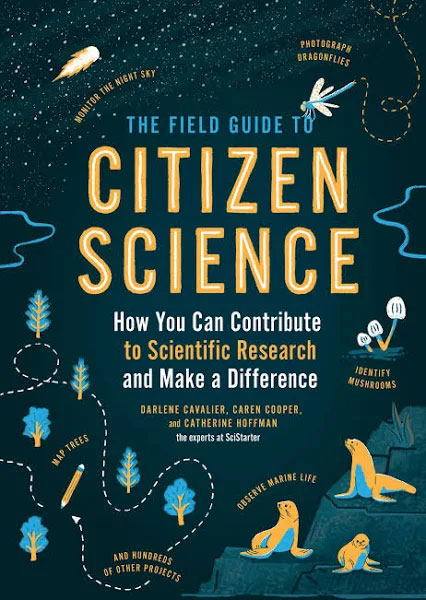 The Field Guide to Citizen Science: How You Can Contribute to Scientific Research and Make a Difference | Darlene Cavalier, Catherine Hoffman, and Caren Cooper | Timber Press | 2020 | 188 pages | ISBN 978-1604698473

The Library and Community Guide to Citizen Science PDF

The Network of the National Library of Medicine (NNLM), a program of the National Library of Medicine (NLM), has expanded its partnership with SciStarter and the School for the Future of Innovation in Society at Arizona State University to support Citizen Science Month. Visit scistarter.org/nlm to find projects to help your community explore the impact of the environment on everyone's health.

The National Institute for Environmental Health Sciences has a mission to discover how the environment affects people in order to promote healthier lives. Take part in their mission.

Engage young citizen scientists with the National Institute of Environmental Health Sciences (NIEHS) resource for kids, parents, and teachers to find fun and educational materials related to health, science, and the environment we live in today. 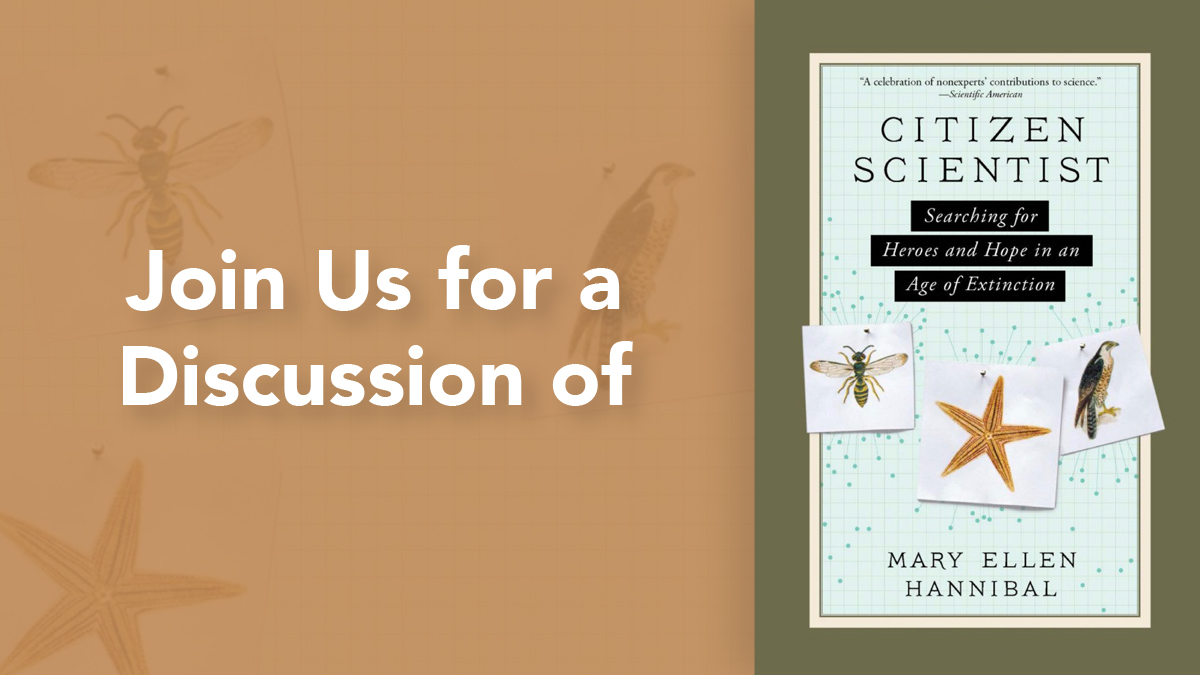 Discussion Guide for Citizen Scientist: Searching for Heroes and Hope in an Age of Extinction
Download and print the PDF 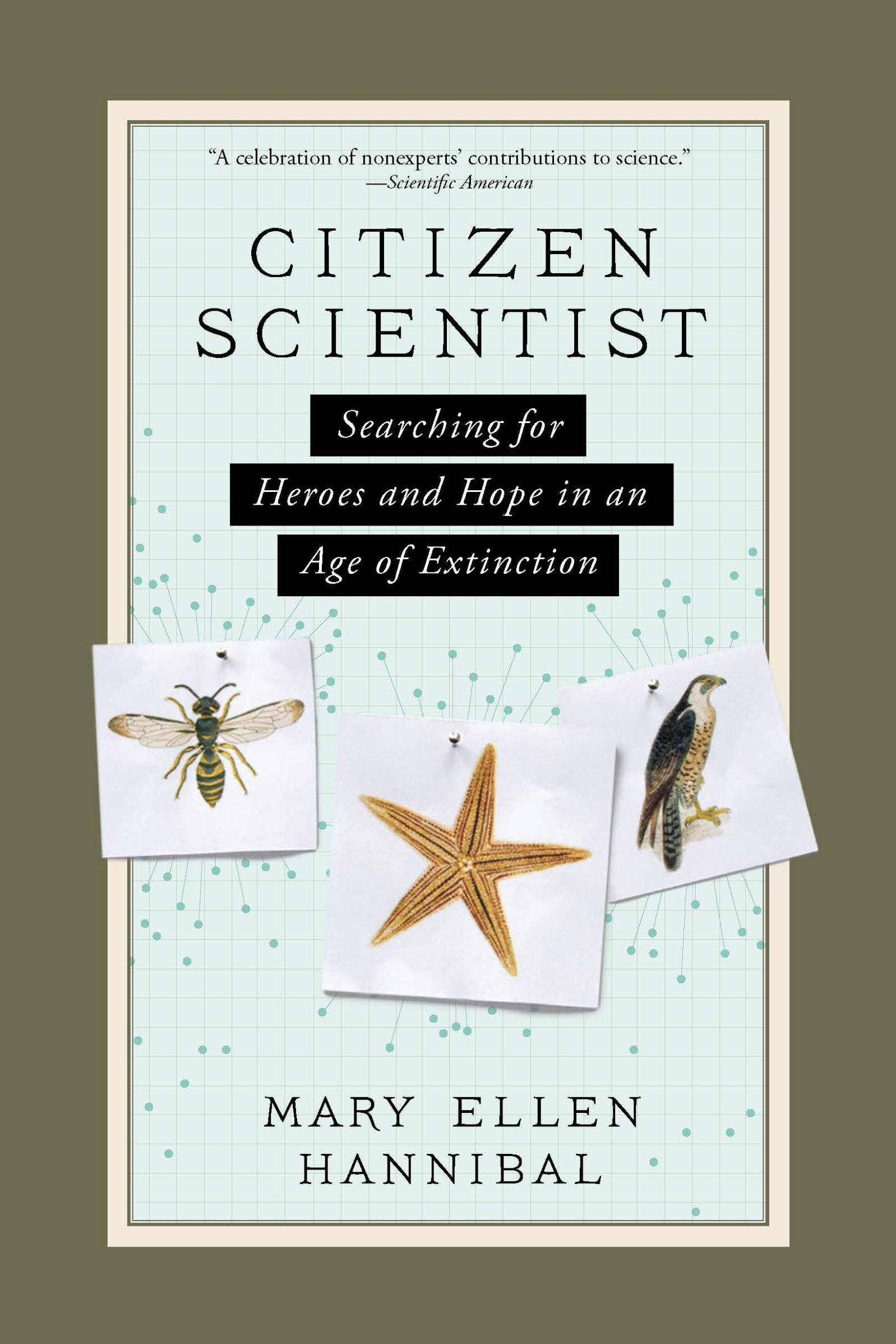 Award-winning writer Mary Ellen Hannibal has long reported on scientists’ efforts to protect vanishing species, but it was only through citizen science that she found she could take action herself. As she wades into tide pools, spots hawks, and scours mountains, she discovers the power of the heroic volunteers who are helping scientists measure—and even slow—today’s unprecedented mass extinction. Citizen science may be the future of large-scale field research—and our planet’s last, best hope.

Mary Ellen Hannibal is a long-time journalist focused on natural history and literature. She is a recipient of the National Association of Science Writer’s Science and Society Award, among other honors, and is currently a Stanford media fellow. Mary Ellen Hannibal’s work has appeared in The New York Times, San Francisco Chronicle, Esquire, and Elle, among many other outlets.

Book: The Crowd and the Cosmos
Left Box 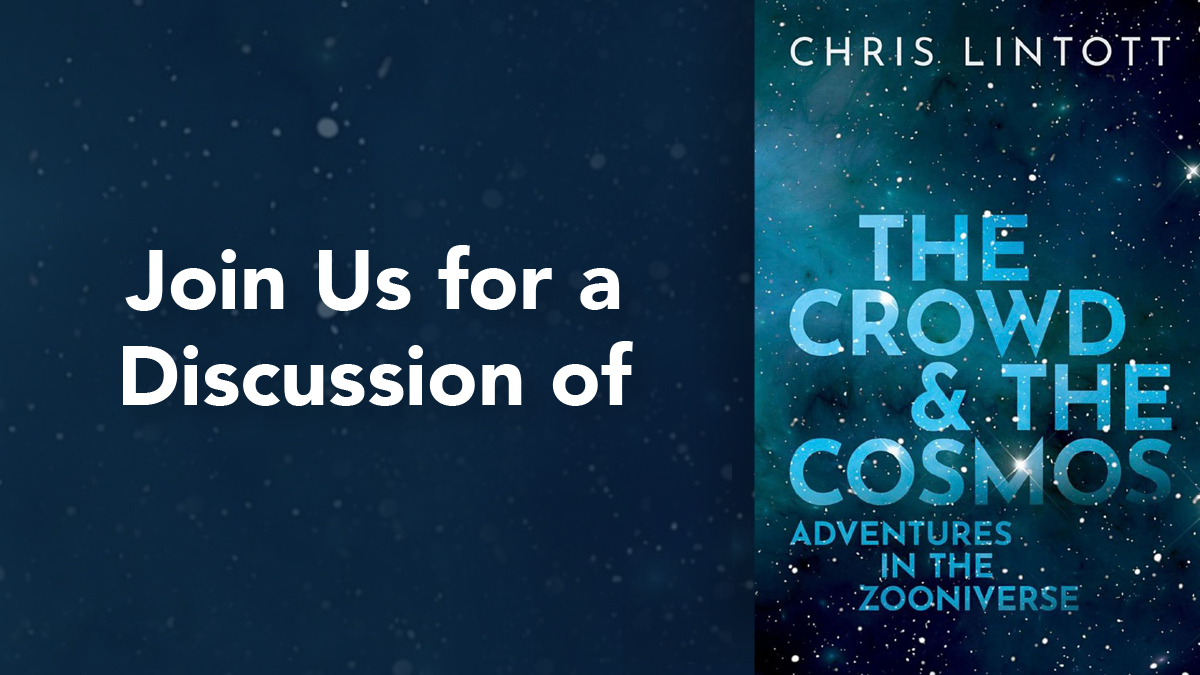 Discussion Guide for The Crowd and the Cosmos: Adventures in the Zooniverse
Download and print the PDF

In this book, Chris Lintott describes the exciting discoveries that people all over the world have made, from galaxies to pulsars, exoplanets to moons, and from penguin behavior to old ship's logs. This approach builds on a long history of so-called "citizen science," given new power by fast internet and distributed data. Discovery is no longer the remit only of scientists in specialist labs or academics in ivory towers. It's something we can all take part in. As Lintott shows, it's a wonderful way to engage with science, yielding new insights daily. You, too, can help explore the Universe in your lunch hour.

Chris Lintott is a professor of astrophysics at the University of Oxford, where he is also a research fellow at New College. As Principal Investigator of the Zooniverse, he leads a team that runs the world's most successful citizen science projects, allowing more than a million people to discover planets, transcribe ancient papyri, or explore the Serengeti. For this work, he has received awards from the Royal Society, American Astronomical Society, and Institute of Physics among others. A passionate advocate of the public understanding of science, he is best known as co-presenter of the BBC's long-running Sky at Night program and the author, with Queen guitarist Brian May and Sir Patrick Moore, of two books (Bang!: The Complete History of the Universe (Carlton Books, 2007) and The Cosmic Tourist (Carlton Books, 2012), both available in more than 13 languages.

Do you want to share this book with your reading group? The Network of the National Library of Medicine (NNLM) has made it easy to download the discussion questions, promotional materials, and supporting health information from this page. 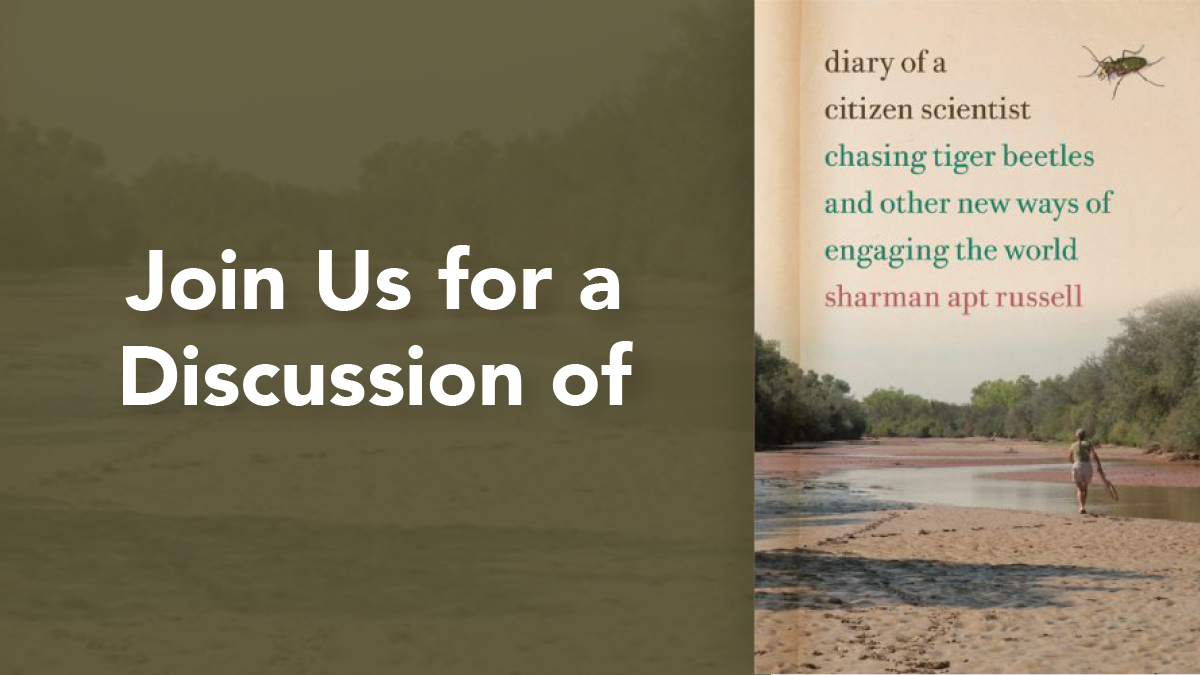 Discussion Guide for Diary of a Citizen Scientist: Chasing Tiger Beetles and Other New Ways of Engaging the World
Download and print the PDF 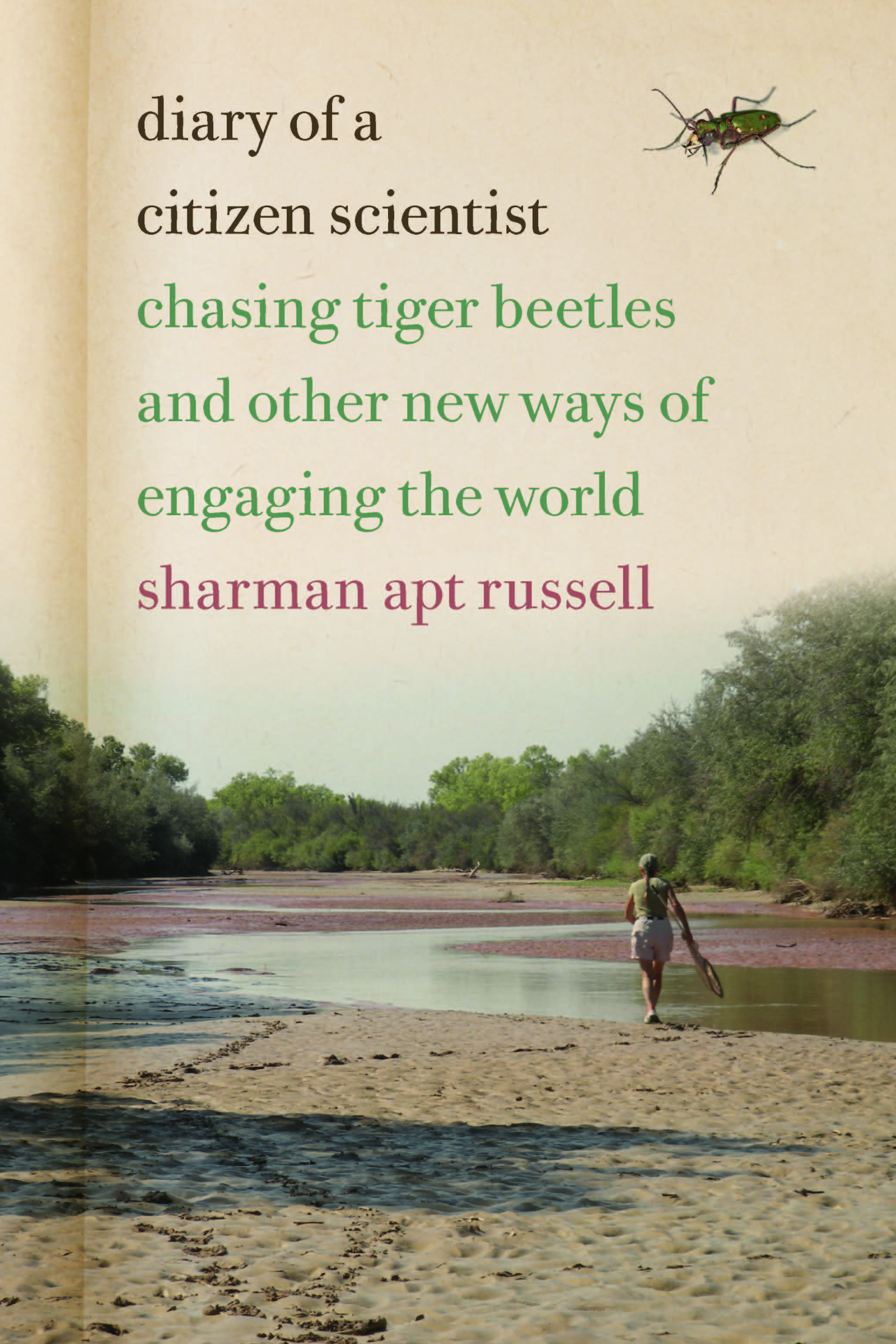 Diary of a Citizen Scientist is a timely exploration of the exploding world of citizen science where hundreds of thousands of volunteers are monitoring climate change, tracking bird migration, finding stardust for NASA, and excavating mastodons. The story is told through the lens of nature writer Sharman Apt Russell’s yearlong study of a little-known species, the Western red-bellied tiger beetle. In a voice both humorous and lyrical, Russell recounts her persistent and joyful tracking of an insect she calls “charismatic,” “elegant,” and “fierce.” Patrolling the Gila River in southwestern New Mexico, collector’s net in hand, she negotiates the realities of climate change even as she celebrates the beauty of a still-wild and rural landscape.​ 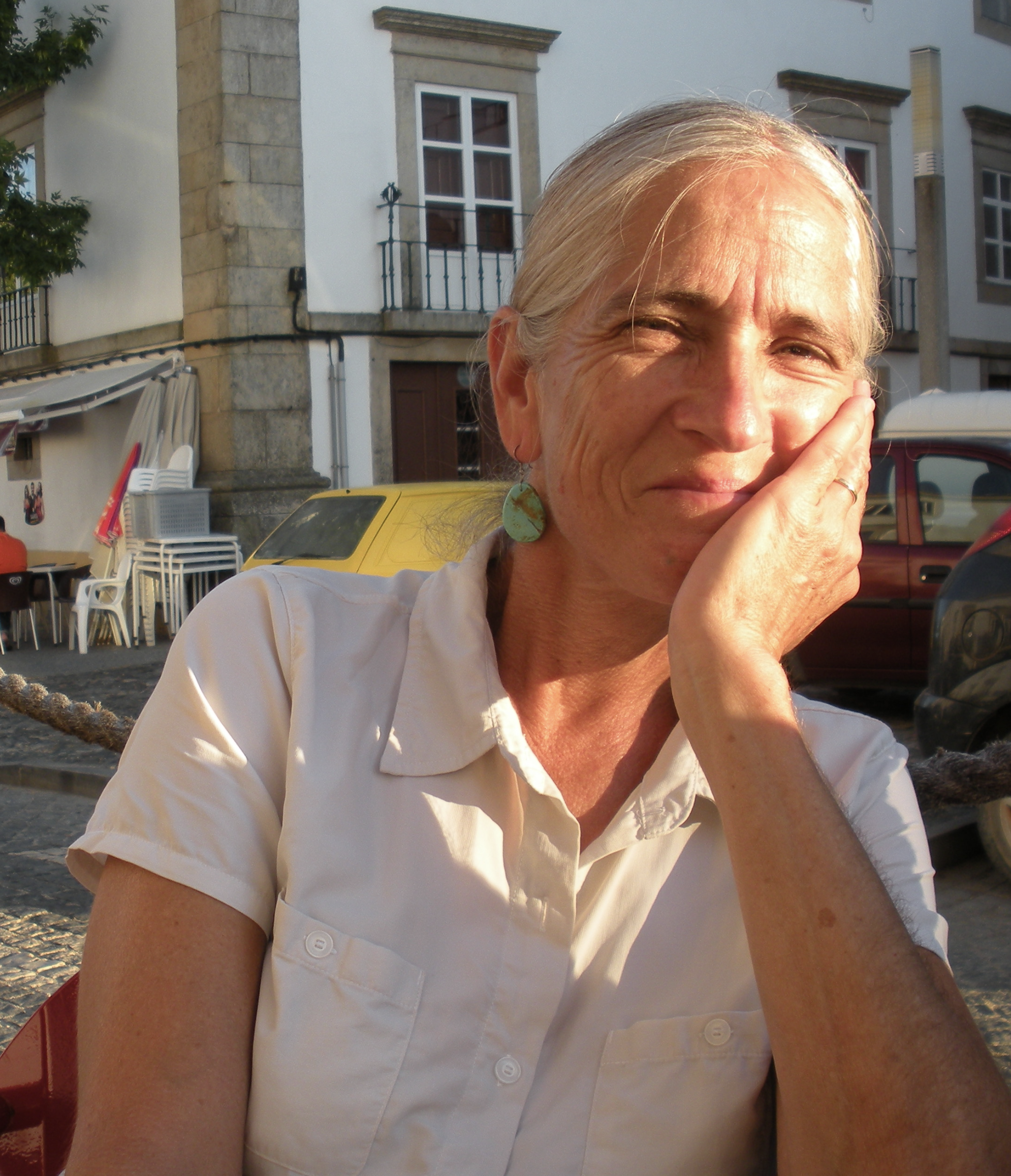 Falling in love with the diversity of citizen science, Sharman Apt Russell participates in crowdsourcing programs that range from cataloging galaxies to monitoring the phenology of native plants. She applauds the growing role of citizen science in environmental activism and marvels at the profusion of projects around the world. Russell was born at Edwards Air Force Base in the Mojave Desert, raised in Phoenix, Arizona, and settled in southern New Mexico. She is a professor emeritus in the Humanities Department at Western New Mexico University in Silver City, where she teaches writing for graduate students. Russell received her MFA in Creative Writing from the University of Montana and her B.S. in Conservation and Natural Resources from the University of California, Berkeley.

< Back to Reading Club